Rebuilding Beirut in His Image

Home > Relief: Help for Those in Need > Rebuilding Beirut in His Image

In August of 2020 Beirut, Lebanon suffered a devastating explosion in a major port that left 6,500 injured, 300,000 homeless, and nearly $15 million in property damaged. As the whole world reeled in the wake of Covid-19, the immediate devastation to Beirut called for directed attention to the problem.

Our partners answered that call with full force, stepping in right away to serve some of the needs that arose in the aftermath.

An area where Mission ONE partners saw an opportunity to help was in distributing computer tablets to families in order for their children to continue their education. As nearly everyone discovered over the course of the year, letting children fall behind in school can have a lifelong ripple effect. In God’s Kingdom, children are held in the highest regard and should be insulated in times of crisis. Additionally, in order to serve the generation to come in His image, we have to value their mental growth and development with the same veracity that we serve their physical needs.

The communities of St. Michael and Karantina worked to clean streets, clear debris, distribute food and provide hygienic essentials, while also serving the need for normalcy, education, and social interaction. They engaged in prayer, listened to survivor stories, and sought to meet each of the essential needs presented.

Though the incident was almost entirely wiped from the headlines within days here in the U.S., our partners have continued to serve in the many months that have followed. It’s easy to have an out-of-sight, out-of-mind reaction to foreign tragedy once the media is no longer focused on it. However, as God’s children, we must all recognize that our brothers’ and sisters’ cries still merit attention even after corporations redirect.

When asked what the scope of the project would look like, partners responded that they were in an indefinite effort to help restore structural and spiritual damage. They have fixed around 30 homes and supplied supplementary income to three businesses unable to operate.

Partners have expressed the feeling of being “the hands and feet” of Jesus as they walk the streets of Beirut, listening to the accounts of what the Lebanese people are experiencing and being able to respond with action.

The Mission ONE team’s reputation has become one of action, not false promises. When our partners arrive they get to work, and when they say they are there to help, they do.

Creating space that is “more like the Kingdom” is not about waterfalls and utopic fields. It’s about bringing peace in times of devastation. It’s about rolling up your sleeves and joining your brothers and sisters in labor. It’s about service, sacrifice, and offering whatever it is you have to give to replenish the world as He sees fit.

A tragedy like that in Beirut tends to call in same-day saviors: donations, food drives, collective clean up crews. And while these offer brief relief that do indeed serve a purpose, it is the long-term giving that helps draw people out of rubble and towards God.

It is in a space of prolonged contribution, that people can really see God working through their fellow man. When we give in ways that ask for no reciprocation and continue to offer even after the donors and emergency relief has dried up, that is when minds are changed and hearts are opened. When everyone has gone except those working through the Lord, people begin to see His power.

In our own lives, we see need every day. Some of these needs may inspire us to share a social media post or toss a few dollars to a cause. Maybe you go so far as to attend an event or bring awareness to others in your circle. All of these are noble, but as God’s kingdom is an eternal pool of love and offering, so too must your pursuits be in the area where you see the most need.

Push to drive past the minimum offering and seek reasons to show up for a cause again and again.

Therein lies His Kingdom. Therein lies the opportunity to draw more to Him. As stated by one of the partners on the ground in Beirut:

“The Lord is using the team to open up blind eyes to the truth of the Gospel because of the way they are working and meeting needs. Seeds are being planted, and they look forward to seeing the fruit that is produced because of their witness.” 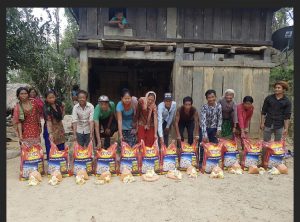 What happens to a community in poverty when disaster strikes? We often think of poverty as a combination of a few passive forces that hold back a community’s ability to be more like the Kingdom of God and pursue human flourishing. It can be experiencing hunger and a lack of job opportunities, basic education, clean…