Mission ONE is working to transform Pokot, Kenya through a local Indigenous partner living and working in the community. In 2021, the All-Girls School was established and enrolled 18 girls, many attending school for the first time.

The All-Girls School, run by educators who have been to university themselves, gives the girls an opportunity for a future filled with hope, dignified work, and overall community transformation. They are committed to teaching not only traditional school subjects and the life-changing message of the gospel, but also educating the girls about the damage caused by gender violence, child marriage, and female genital mutilation (FGM) – all relevant obstacles in this community.

This partnership is integrative between community, government, and church, bringing light to how God moves through his people in multifaceted and beautiful ways. 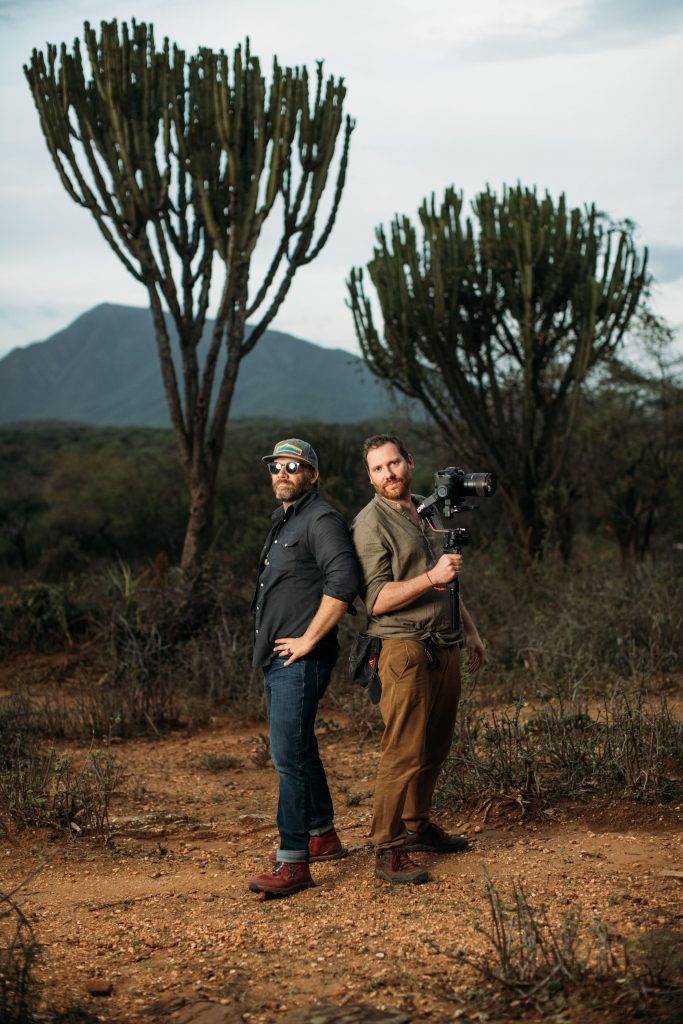 Last month, Mission ONE asked generous donors like you to join hands with us as we worked to create the next expansion of opportunities for the girls in Pokot. We successfully raised over $40,000, which will fund the new classroom and ensure that more girls in this community will be transformed through access to education.

In order to share this powerful message, we knew we needed to tell the authentic story of the community in a way that built lasting connection over thousands of miles. How a story is told is a crucial part of authentic and dignified communication and an important part of how Mission ONE brings the stories of our global community to your home.

Recently, our media partners Prospect Arts visited the community of Pokot to capture media that would help us tell the story of the girls there. We heard from Jeff Arnold, US Creative Director of Prospect Arts and Tanya Martineau, a producer, director and photographer.

Tell us a little bit about Prospect Arts and how you approach your work.

JA: Prospect Arts is a production company that has offices in Tunbridge Wells, UK and Austin, TX. We work as a small team to help bring stories like the Pokot girls school to a broader audience. We partner with organizations on the ground that are doing the amazing work of transformation. We’ve decided to focus on documentary storytelling as we’re curious about our world and have a passion for traveling and spending time in communities around the world. 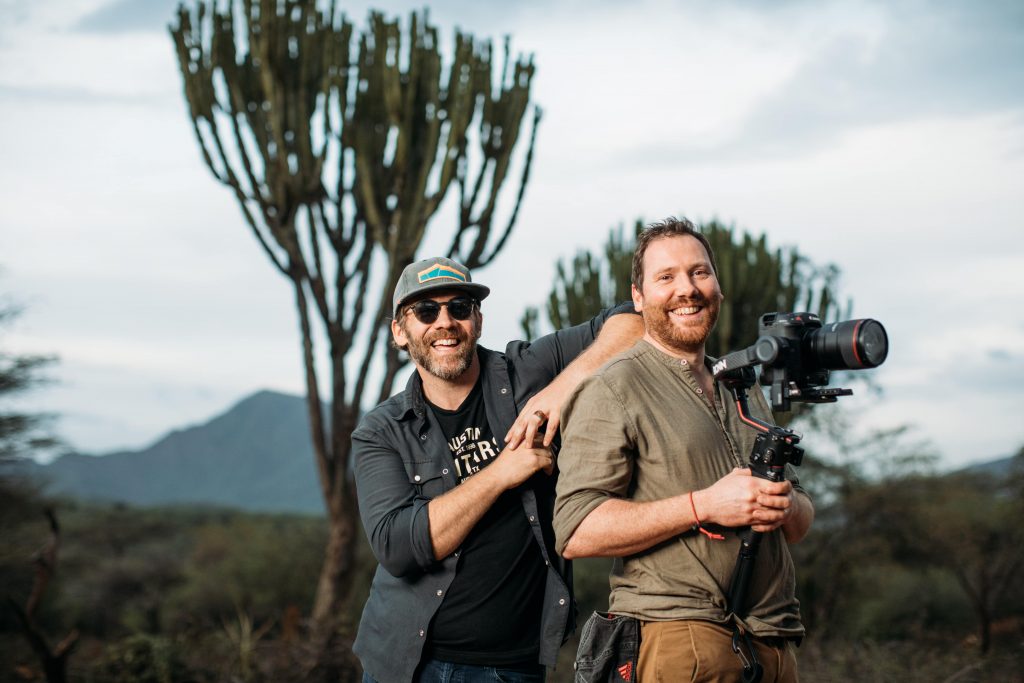 Our approach to storytelling is to spend time with the communities we have the privilege to visit. Get to know their story and make sure we also share a bit of our culture with them in the process. Each trip usually starts with a day without cameras and just listening and asking questions. Then we go back that night and look at our plans to see what needs to shift.

What makes Mission ONE different from other organizations that you’ve done work with?

JA: The thing I believe that separates Mission ONE is that they work through local missionaries and help empower them. They really don’t have an agenda other than listening to their partners and helping their visions come to life. Much like Willy did in Pokot.

What do you do to prepare for these media collection trips?

JA: Lots of planning and research goes into our pre production before each trip. Lots of Zoom meetings with the organization we are working with to make sure we are on the right track. Then we usually jump on calls with the country staff and learn about driving times, safety, and accommodations. Next we start to form a plan and a schedule for our time with the communities and leave some room for flex because we have learned things often change on the ground. So we say make a plan but then be ok if it all changes– because it often does.

TM: There’s a lot of research involved. We talk with the organization to understand the mission, goals, and values. I try to have a few pre-interviews with the local staff on the ground to not just understand the programs but to learn about the culture and challenges in that specific country, region, and territory.

For this particular trip, I really wanted to understand the dynamics of the Pokot women and men and their views on masculinity and femininity. It’s important to understand the generational values and beliefs that have been passed down as well as the outside influences that are shifting those traditional practices. I wanted to learn who is creating those shifts, how it is being received by the younger generation and the older generation. I wanted to be mindful of those tensions.

How are you committed to telling an authentic story that is true and brings dignity to the people you’re documenting?

JA: I think authenticity comes from listening, writing down your findings, and being true to the data. I make sure to listen to my intuition as I’m meeting people and hearing their stories. I often call it “feeling the space and holding room for people to share.” Being genuine and honestly just being a human and connecting with other humans on a basic level. At the end of the day we all want the same things for our families, children, and communities. It’s remembering that and knowing you’re a welcomed visitor. These people are trusting you to share their story just as they are telling it.

TM: Every time I take a photo, I always ask myself if the parents would be proud of the photo I have taken. The lens holds the power on how an audience interprets a culture and an individual. I am always wanting my imagery to reflect hope, joy, and resilience even if it’s a challenging subject matter. Some trips I will make spend an entire day with those I’m capturing so they know I care more about who they are than the final product. It’s a way to build trust and learn what concerns and fears they may have about being photographed or filmed. I knew going into this project that the school is very new and FGM was still being practiced in the community. There were several girls that had children, some as young as 15 years old. I didn’t want them to feel shame or embarrassed about their circumstances. I wanted them to feel celebrated and seen. I shared with the Pokot girls about my vision for the portrait session. I told the girls I wanted to show what it means to be strong. Not physically, but I pointed to my heart. The girls nodded understanding the universal symbol of a strong heart. I wanted to give these girls what every girl wants: the chance to dress up– to look and feel beautiful. When people look at these photos, I want them to see brilliance, fierceness and dignity. None of us want to be remembered by our worst experiences. I don’t want these girls to be seen as FGM or early childhood marriage victims but as humans worthy of dignity. These girls have witnessed an unspeakable amount of brutality and violence. Much has been taken so I wanted to give a way for them to regain their power. I wanted to give a visual reminder that they are royalty even when their world speaks otherwise. I bought a printer with me and gave each girl a photo of themselves. I wrote a personal note for each of the girls on the back of the photo. Sometimes when we have hard days, we need reminders of the beautiful moments to give us hope to keep moving forward. I wanted them to remember the feeling they had when a foreigner came to their school with a camera and crazy lights and took long walks around the school. That the photo would remind them that they are seen and worthy of love. 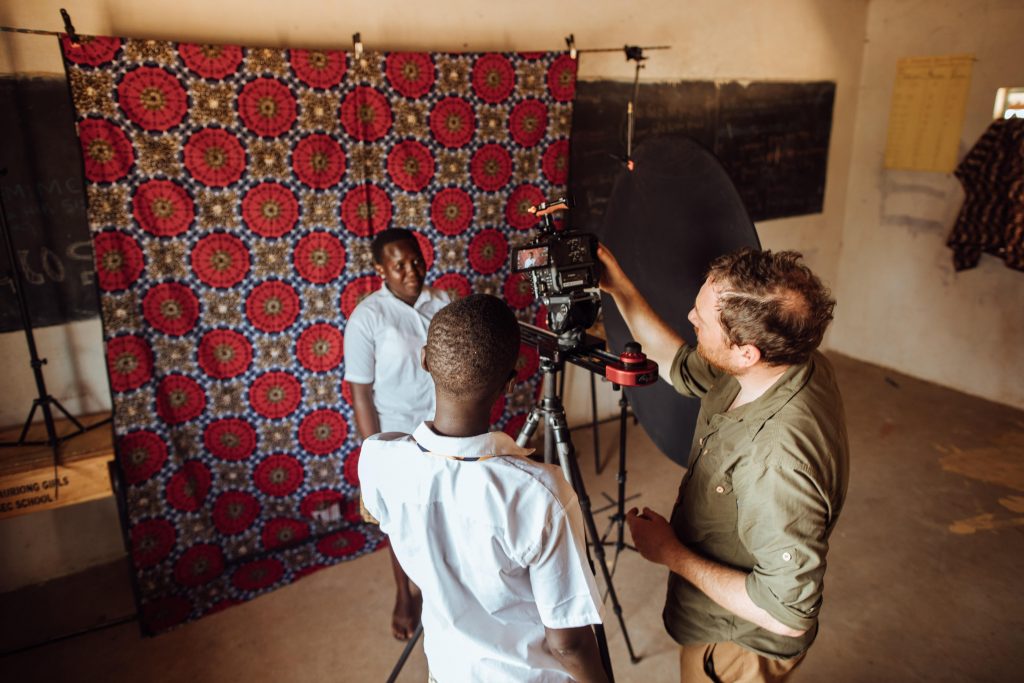 How do you believe that capturing exceptional media creates connections for donors, advocates, and supporters in the United States/ why does it matter?

JA: It’s a dance between art and documenting the work. Our films and photos bring these stories into the viewer and donors world that they otherwise might never know. And we want to capture the whole story in a single image or through a short film. We want the viewer to feel as they feel and bring them into these cultures. In today’s world we see content all day everyday and we want people to stop, slow down, and listen to these stories. We want to help them really understand where their money is going and the visions they are getting behind.

There is a place and a time for phone photos and quick updates from local staff, but we believe that if you tell these stories with an authentic cinematic lens it brings the donor closer to the work and gives a voice to the community they are supporting– that sits in your mind for the long haul. 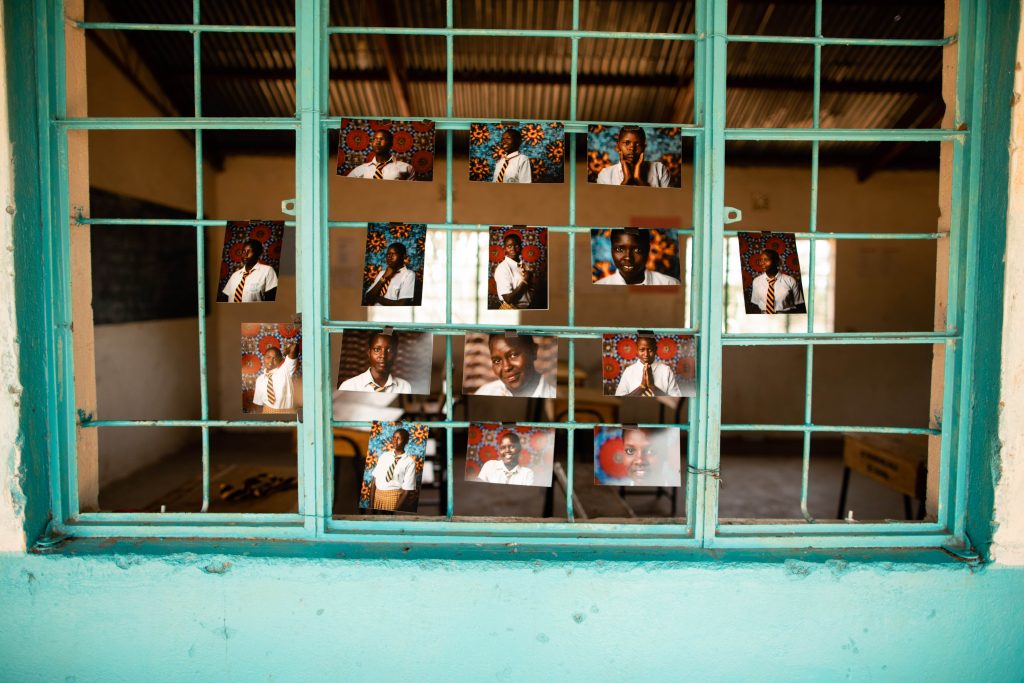 What most surprised you about meeting the girls of Pokot?

JA: I think for me the openness they had at the end of day one as we moved into a portrait session with every girl was really fun to watch. We had only been there a few hours and we were able to build trust with each other and then the girls were just themselves in front of the camera. I think the images speak for themselves and give them power and dignity that they were feeling in that moment. 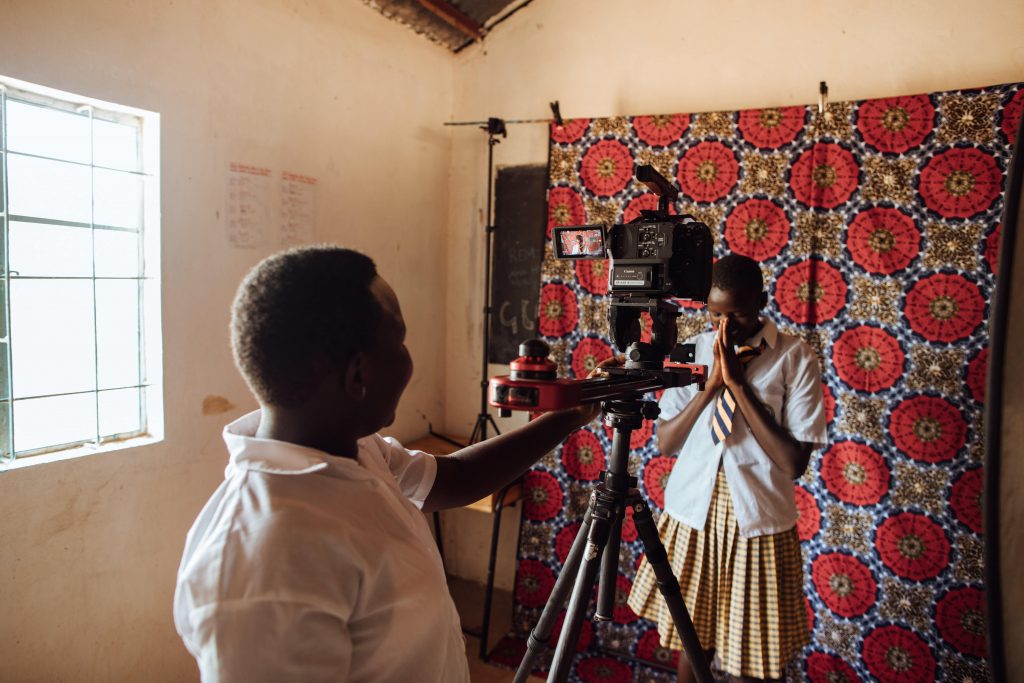 Describe the most powerful or impactful moment of your trip.

JA: I think just being with those girls each day was pretty powerful. They are the first women in their community to go to high school. It’s incredible and you could see it in their faces. I couldn’t stop thinking about that during the time we were with them.

TM: Normally I would say when they were able to see their pictures for the first time. But this time it was the moments when it was just us girls and we were able to talk about the differences between our cultures. They asked what the trees were like in America and if our goats looked different than their goats. I told them about the lakes and mountains and snow I’ve experienced in America. I showed them pictures of what my home looks like and who my friends were. I told them about the different places I get to travel to. I could see their eyes go wide showing them pictures on my phone into a world they’ve never experienced before. Their mind and hearts expanded and I could feel their sense of wonder and awe.

That was one of the more treasured experiences I had. 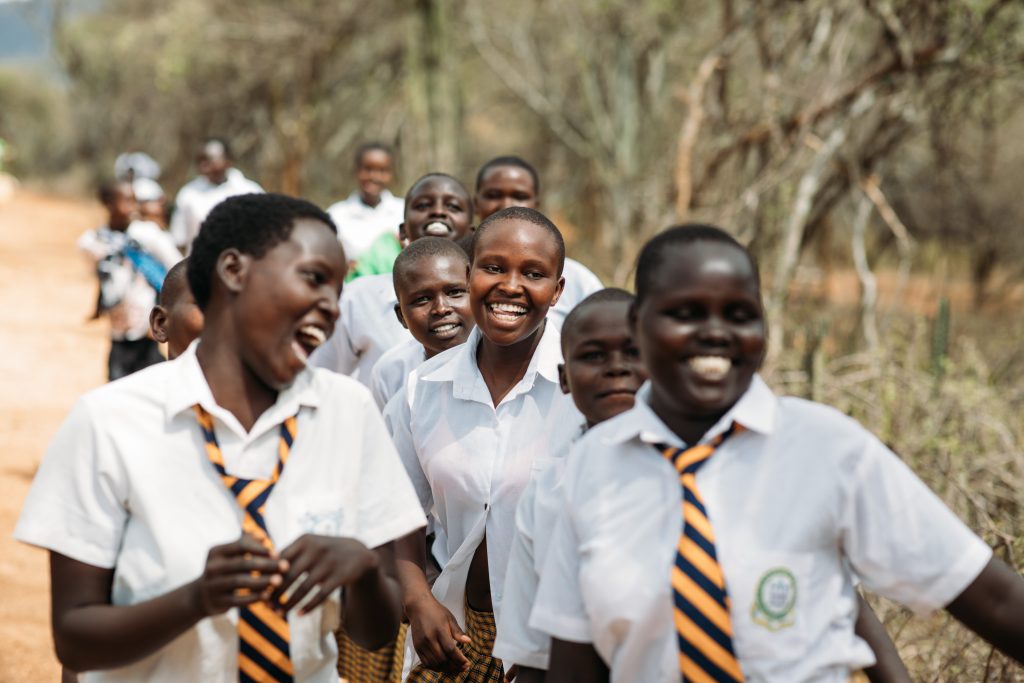 What do you want people to know about the community of Pokot and the girls there?

JA: It’s not going to happen overnight. It’s going to take years to work through some of the issues the women in this community face. But that’s how true transformation happens. As Willy said no one can tell them what to do. They have to be the ones to come back to their community and that’s where real change happens.

If you haven’t had an opportunity to support the work Mission ONE is doing in Pokot, prayerfully consider giving toward the expansion of the All-Girls School. Your gift will leave a legacy for generations in Pokot, making this community look a little more like the Kingdom of God.

The Ephesians 2 Gospel Project was born out of a realization that Ephesians 2:11–22, a text about the gospel of peace through cross-cultural unity in Christ, is widely ignored as part of the gospel.   In our Western culture, the gospel is often viewed through an individualistic lens. With this perspective, much is missed about how…