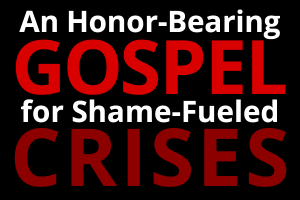 I presented “An Honor-Bearing Gospel for Shame-Fueled Crises,” at the annual conference of EMS (Evangelical Missiological Society) in Dallas, Texas on September 14, 2019. The EMS theme for 2019 was “Mission Amid Global Crises.”

The article is slated to be published in early 2020 in Missio Dei Journal.

Why am I concerned about the intersection of honor-shame with global crises such as terrorism, racism, or refugees? It’s partly because my parents grew up in Germany and lived through the trauma of World War 2.

My mother grew up in Hanover; she said the city was bombed every day for three years. My father was drafted into the German army; he was captured in Italy by the Allied Forces and became a prisoner of war in Poland.

Many millions of Germans were refugees after WW2. My mother was on a train filled with refugees that passed through the city of Dresden; the next day (February 13, 1945) the city was fire-bombed, killing an estimated 25,000 people.

Four years after the war, my father was released from serving as a POW in Poland. In 1953, my grandfather Mischke emigrated to the United States with his wife and three adult sons; the oldest of the three was my dad, Günther. They were fleeing post-WW2 Germany—seeking a better life in America.

I am grateful to be a second-generation American. I am sympathetic toward those who, like my grandfather, are seeking refuge and a better life in America.

Growing up in America, I learned about world history in school. I had a question for my parents concerning World War 2. Why the Holocaust? Did you know about it? Why did Hitler kill all those Jews? My mother said, “We didn’t know.” (My mother was a remarkable Christian woman for whom I am deeply grateful, but she had unsatisfying answers to this question.)

Today, my understanding of the role of honor and shame in nationalism, tribalism, racism and violence helps me make sense of it all. Honor and shame play a huge role in ethnocentrism, terrorism, racism, and the refugee crisis. I believe the gospel of Jesus Christ speaks loudly to these crises. The gospel answers these questions: To whom do we belong? In whom do we find our sure source of honor?

Humanity suffers from global pathologies including: the refugee crisis, terrorism, and racism. These problems have in common the concern for security and dignity. The security issue is marked by the question, How do we prevent hostility or violence? The dignity issue is marked by the question: Who are we—to whom do we belong? This dual concern, first, for our survival, relief from hostility—and second, for our honor, the recognition of our identity—is an unrelenting force in history. Shame writ large is at the crux of these historical forces. Is the gospel robust enough to offer a cure? Yes: One, the gospel deals with group-based violence (addressing the security question); and, two, the gospel offers to re-glorify humanity from sin’s objective shame (addressing the dignity question). Christ Himself is the cure as Honor Writ Large—Word made flesh. The gospel is both proclaimed and embodied by the Church—a gospel of hostility-killing peace and shame-covering honor.

Click here for the audio recording of my presentation (27 min).

A Story of Impact

My name is Bikonzi, and I am the Coordinator of Strategic Projects here at Mission ONE. I work directly alongside our local partners as they are serving and meeting the needs of their communities. A few months ago, I had the honor of visiting our local partners in South Sudan. I left feeling inspired by…