Six ways the Bible undermines racism: #1 All Gentiles are born “strangers and aliens”

With this post I begin a series on how the gospel of Christ offers a cure to the pathologies of racism and tribalism. This blog post is adapted from my forthcoming article in Missio Dei Journal: “An Honor-Bearing Gospel for Shame-Fueled Crises.” 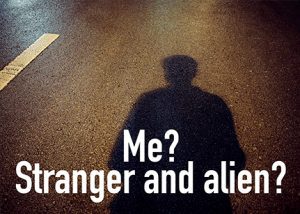 11“Therefore remember that at one time you Gentiles in the flesh, called ‘the uncircumcision’ by what is called the circumcision, which is made in the flesh by hands—12remember that you were at that time separated from Christ, alienated from the commonwealth of Israel and strangers to the covenants of promise, having no hope and without God in the world.” –Ephesians 2:11–12

“So then you are no longer strangers and aliens, but you are fellow citizens with the saints and members of the household of God” –Ephesians 2:19

Who are the strangers and aliens?

“So then you are no longer strangers and aliens…” (Eph 2:19). To whom is Paul is speaking?

He is not addressing low class refugees, destitute sojourners, oppressed immigrants, or racial outsiders. He is addressing a much, much larger group of people whose levels of social status are as wide-ranging as all humanity.

He is telling all non-Jews, the vast majority in the magnificent city of Ephesus: before you became followers of Christ, you were aliens and outsiders to the people of God.

Paul is addressing Gentile-background believers, “called the uncircumcision by the circumcision” (Eph 2:11). Gentiles are simply anyone and everyone who does not belong to the Hebrews, the ancient people whose father is Abraham, specially chosen and blessed by God (Gen 12:1–3).

In Ephesians, Paul is primarily addressing Gentiles (Eph 2:11; 3:1) who now give their allegiance to the Christ. In their pre-Christian status they were non-Jewish “others.”

Who are the ethne?

The Greek word for Gentiles is ethne. In missiology, ethne has come to refer to the world’s range of distinct ethnicities, tribes, or peoples as a way to emphasize the need for reaching the unreached people groups. But this stretches the term beyond what it originally meant in its original context (see Jackson Wu’s fuller explanation here). The term ethne was simply “used by Jews as a label for non-Jews”.1 Paul’s emphasis here is not on the diversity of Gentile people groups; rather, it is on their monolithic status as outsiders. Their outsider status means objective shame before God.

In verse 11, Paul the Jewish Christ-follower reminds the Gentile Christians in Ephesus of their non-Jewish, non-people-of-God background. He tells the Gentile males in his audience they are not circumcised (as though they didn’t know). He says Gentiles are “called the uncircumcision by the circumcision” (Eph 2:11 ESV). “The label ‘uncircumcised’ is a literal description of Gentile males, since, at that time, Jewish men were known as having been circumcised.”2 Thus, Hart in his translation of the New Testament, renders verse 11 as: “Therefore, remember that you, formerly gentiles in the flesh, the ones called ‘Foreskin’ by the so-called ‘Circumcision’…”3

The principle of Scripture interprets Scripture applies here. Recall David’s bold question regarding Goliath: “For who is this uncircumcised Philistine, that he should defy the armies of the living God?” (1 Sam 17:26). This is clearly derogatory. For David, the military battle was an honor-shame contest as much as a life and death struggle. David’s use of derogatory labeling is apt, if not audacious.

In Ephesians 2:11, Paul seems undiplomatic, to say the least. Paul indirectly claims honor status for his Jewish ancestry; at the same time, Paul seems to be putting all Ephesian Gentiles into the category of “uncircumcised Philistine.” This is who the Gentile believers were “at one time” (Eph 2:11) before Christ intervened in their lives. Is he insulting the majority of his audience?

An insult, or not?

Paul’s words might be read as an insult. But they could also be understood as a way of acknowledging humanity’s automatic tendency toward racism or ethnocentric attitudes. In this case, it is the ethnocentrism with which he is most familiar: the Jewish version.4 Could it be Paul is also critiquing the Jews? Could it be Paul is identifying a Gentile caricature of the Jews: the Jews are a minority group who are culturally separate, whose religious practices (weirdly) include circumcision, who because of ethnocentrism, look down on all who they consider “unclean”?

So although Paul’s words might be read as an insult, it is likely that this is a more complex relational dynamic. We do well to keep in mind that Paul’s vocation and passion as the apostle to the Gentiles was for the inclusion of the whole world of Gentiles in the salvation story of God (Rom 15:15–16). Plus, Paul is obviously honoring Gentile Christians in the first chapter of Ephesians as he gives eloquent voice to the church as a community possessing immense honor in Christ (Eph 1:3–14). Moreover, Paul is well-known for relativizing Jewish exclusiveness and identity (Eph 3:1–6; Gal 3:28).

(NOTE: In Philippians 3:4–8, Paul even relativizes his own very substantial ascribed and achieved Jewish honor. What he says is stunning and cuts to the bone. This is only possible in Christ; it is only through the magnificent honor gained through knowing the Christ. JESUS himself gives Paul the emotional and spiritual margin to relinquish the primacy of his traditional sources of honor. Jesus, Jesus, JESUS! We will look at this passage in Philippians more closely in a forthcoming post.)

Paul is relativizing all social capital outside of Christ

In Ephesians 2:11, we are not sure whether Paul is being insulting or conciliatory toward the Gentiles with the words, “called the uncircumcision by the circumcision.” But we can be confident of this: Regardless of the Gentile’s pre-conversion (or current) wealth, citizenship, race, nobility, education, popularity, power, or privilege … regardless of their local, cultural insider status, the Gentiles to whom Paul is writing had been at the margins of the only community that truly and eternally matters—the people of God.

Having relativized Gentile identity (in verse 11) among the Ephesians, Paul continues to describe Gentiles (in verse 12) from a Jewish perspective, again using shame-and-outsider terminology. They were 1) “separated from Christ,” 2) “alienated from the commonwealth of Israel,” 3) “strangers to the covenants of promise,” 4) “having no hope,” and 5) “without God in the world” (Eph 2:12).

Ephesians 2 describes only two groups—two levels of honor status. Outsiders comprise the first group. They are outside of God’s gift of grace in the Christ; they do not belong to God’s people. Insiders comprise the second group. They are recipients of God’s grace in the Christ and belong to God’s people. Paradoxically, this new community of God’s people is amazingly inclusive—anyone can be an insider through relationship with Christ. Everyone is welcome by receiving the gift of God’s grace (Eph 2:8–9).

The only social status that matters

Whatever honor status they held as pre-Christian Gentiles adds not one iota to their actual, eternal social capital. The only thing that matters is this: Who are they in relation to God in Christ and his people? These Gentiles are being reminded of their pre-Christian identity by what they were not: they were not in Christ. They shared no ancestry with God’s people Israel or their covenant-promises. They were outside of God’s family.

Could it be that Paul intends that believers who hold an attitude of supremacy or exceptionalism to feel the sting of conviction? Could it be that any Christians treasuring their blood-family relations, vocational pride, Ephesian identity, or Roman citizenship above their in-Christ identity are limiting the impact of the gospel?

Willie James Jennings, in his remarkable book, The Christian Imagination: Theology and the Origins of Race, describes the theological and historical underpinnings of racism. It is eye-opening to see how racism, white superiority, and conquest were theologized by white European Christians. Toward the end of his book, he considers the truths in Ephesians 2:11–20. Dr. Jennings writes, “The power of this account of Gentile status radically undermined any distinction Gentiles held for themselves vis-à-vis other peoples. It is the ultimate deconstructive statement regarding Gentile ethnocentrism.”5

What is God saying to me?

Concerning me personally. Essentially, God’s Word is telling me in Ephesians 2: Werner, you being white, American, and middle class isn’t worth what you think it is in God’s big story. Remember, you are a Gentile. At one time you were a stranger and alien to the people of God (Eph 2:11–12). You had the status of “outsider” before your allegiance to Christ.

But now, you’re no longer an outsider, an alien, a stranger (Eph 2:19). You’re part of the forever family of God—all because of Jesus Christ. And you know what? Your black and brown Gentile brothers and sisters in Christ are just like you. You had a common ancestry—being “alien” to the people of God. And because of God’s amazing grace (Eph 2:8–9), you now share with them a common allegiance to the king of kings—Jesus the Christ. You share “insider status” with all believers, regardless of their race, ethnicity, or social status.
Concerning “my people.” Essentially, God’s Word is telling me in Ephesians 2: Werner, your racial identity having white European blood is in no way superior to any other. Remember: Your people are all Gentiles—they were outsiders, strangers, pagans, aliens to the people of God (Eph 2:11–12). And your Gentile brothers and sisters in Christ (including those who are black and brown) at one time all had the same status as outsiders. You have this in common with them: Your ethnicity and theirs were all at one time “alien” to God’s people.

But now, you’re no longer an outsider, an alien, a stranger. Your people’s story now makes sense as persons and families from various peoples are “grafted in” to the story of God’s people (Rom 11:17–24). You’re part of the forever family of God—all because of Jesus the Christ.

Now, if somebody asks you, “Werner, who are your people? To whom do you belong?”, begin with the eternally honored social group, the body of Christ. Tell them that you, along with your brothers and sisters in Christ from all different races and peoples, are ‘fellow citizens with the saints and members of the household of God’” (Eph 2:19).

See Timothy Gombis, The Drama of Ephesians: Participating in the Triumph of God (Downers Grove: InterVarsity, 2010), 98.