In the Image of God, Male and Female

Home > Main Blog > In the Image of God, Male and Female

The concept of having a distinct, normative vision of masculinity and femininity—biblically speaking, has proven to be challenging. As familiar as we may be with the text in Genesis, where we read God created humans in His image and likeness, we may inadvertently miss some of the more crucial ideas that could change some of the ways we view those roles.

We continue through to the next verse:

“God blessed them, and God said to them, ‘Be fruitful and multiply, and fill the earth and subdue it; and have dominion over the fish of the sea and over the birds of the air and over every living thing that moves upon the earth.’” —Genesis 1:28

How can we rightfully define masculinity and femininity, anchoring ourselves in biblical truth?

Jackson Wu, Honor and Shame Theologian, shares the following regarding these passages of scripture.

“As various scholars have highlighted, the “image of God” is a collective concept, describing humanity. Individuals are made in the image of God by virtue of the fact that they belong to the collective… Being made “in the image of God” entails a mission, a vocational and calling (1:26, 28). Verbs like “have dominion,” sometimes translated as “rule” (over), are applied to both male and female,” says Wu.

“Within the ‘image of God,’ God creates two kinds of interdependent genders. Verse 27 indicates plurality within a singularity. And this brings us to a critical point: If ‘God’s image’ fundamentally distinguishes us, then gender does not,” adds Wu.

With this perspective in mind, we can see that male and female are complementary, having different roles but equal importance.

Some affirm the belief that because in the book of Genesis we read that woman was created as a “helper” (ezer) for Adam, that means women are to submit to men and show subordination.

However, the word “ezer” or “helper” is used throughout the Old Testament a total of 21 times. Yes, it’s in the book of Genesis first when a “helper” was to be created for Adam, but “ezer” also appears three other times used to represent the powerful nations Israel called upon for help.

The remaining 16 times, the word “ezer” refers to God as our helper.

Now, we must understand that God is not subordinate to his creation, so the assumption that an “ezer” (helper) is meant to signify inferiority is incorrect. Therefore, women are to mutually complement men.

To support this idea, Wu reminds us that in the Bible when this verb is paired with people, it indicates a purpose or result; the emphasis goes to the object being built, not the source material.

So, in the case of Eve (woman being created from man as explained in Genesis 2:21) is to complement Adam, not be subordinate to him.

Acknowledging women and their complementary role to men, is not common practice in many parts of the world. There is a lack of equality or collaboration between the two genders and it is often part of the culture to treat women as less-than men.

Mission ONE and our global partners are committed to helping communities around the world be more like the Kingdom of God. By helping women rise up and find new purpose for their lives in dignified work, we can restore their identity, and begin to encourage them to be powerful leaders, missionaries, and earners for their family.

In parts of East Africa, women have been fully dependent on men for generations, and that level of dependence doesn’t allow for spiritual growth. When given the chance to embody their divine strength with a purpose—like through working at a sewing center, women not only change the way they see themselves, their community does too. Which sets an example for future generations of women to have confidence to pursue even more spiritually uplifting endeavors.

This sewing center has allowed women to not only learn sewing skills while being in a safe communal space, but to also engage with other women in their community, and develop deeper relationships, with God’s glory and love as a foundation.

Mission ONE has also started sewing centers in Nepal, and Pakistan, providing opportunities to more women and allowing them to engage with others in their community, recovering their dignity through work. They are able to make a living wage and provide for their family, which gives them a seat at the table, and reminds them of their value.

Femininity is more than the definition of a role, it’s beauty in God’s eyes, it’s having the heart of a lion, and resting in the knowledge that women are powerful leaders making change happen for generations to come.

We must also remember, to avoid falling into a trap of toxic-gendering.When strength is deemed more-or-less “masculine,” we dismiss the honorable character of the “Proverbs 31 woman,” who “dresses herself with strength and makes her arms strong” (Proverbs 31:17).

Empathy, patience, and tenderness are virtues to be cultivated in the Spirit, and nothing in Scripture suggests that they are distinctly or primarily feminine. They should mark every Christ-follower.

Our goal should be about becoming more fully human, not primarily “masculine” or “feminine” as society dictates. There isn’t anything wrong with common character traits associated with either gender, but our goal should not be to limit ourselves to being half-humans.

At Mission ONE we are committed to spreading the gospel of Christ and restoring humanity to all people. Join us as we work to bring down the dividing wall between God and his people, and between the peoples of the world. Help us support the Global Church as it acts locally to transform people and communities through the gospel! 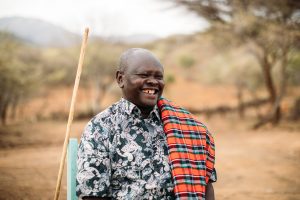