Restoring Honor Through Shame was a course led by Mission ONE in partnership with Empower Women Media in the fall of 2020. Nearly 50 female leaders from places like Pakistan, India, the Middle East, and the USA participated in this inspiring course. Many of them created social media campaigns or videos with the goal of influencing their own communities to see the God-given honor and dignity of women and girls. The following is an interview with one course participant, Terri Marie, who received from Mission ONE a Certificate of Excellence for her short film, “New Stories of Honor.”

Terri, thank you for taking the time to talk with us today. The video that you created is called “New Stories of Honor.” And right in the middle of that video, you talk about Jesus in the way that he extended honor and forgiveness to a woman. It seems like Jesus is important to you. Can you share a little about why you talk about Jesus in your video?

Because I believe the divine elements that Jesus taught us and embodied while he was living his life on earth are so needed and are so relevant to every life. Especially about Jesus forgiving the woman in the stoning story; it is a story about honor. That’s the whole purpose of the film that I made.

I asked my friend Jean, what “Jesus-story” would you use to tell a story about honor and shame? And she said, You know I think it would be the stoning story. That clarified for me what I was going to do.

After taking the Mission ONE course on shame and honor [“Restoring Honor through Shame”], one day the words just poured out for the script. I just wrote the script in one sitting, however long it took to write it.

Can you share a little bit about how you got into producing short films that are stories on behalf of the dignity of women and girls?

That’s actually a lot of different stories. But I will tell you one. I remember being in the mountains of Utah and looking out over the beautiful mountains, and I saw a horse with a colt running. At that moment, my heart opened. And I just thought I’m going to dedicate my life to producing inspirational films to help young women.

What do you see in the Global Church or around the world today involving women and girls which you may find discouraging?

I think the most discouraging thing right now is what we’re seeing in Afghanistan. It’s touching me in such a deep way. It’s like I can almost feel the women over there and their pain. It’s hard to even talk about it right now. But we have to, and we can’t avoid it. This is the time to look at these things and to say “No, we want things to be a different way.” [And the women in Afghanistan] I believe are so hoping for an answer, a way out. I have been in situations where I have needed a way out and I am so grateful there was.

So I believe if we have the means to provide a way to touch the hearts of the people in the world who think that the world still needs power and control, that’s going to change it. I don’t know that moving from place to place is going to be the answer. Eventually, it has to come from within, and that, when it is inspired, comes from above.

One of the things I did in my film is to remain true to our own story which we write with God, with Jesus, with Christ. When we do that, we make a beautiful story.

Can you think of something that is encouraging in the Global Church or the world relative to the honor and dignity of women and girls?

Well, I can mention the work that Shirin Taber is doing with her work in Empower Women Media. She is encouraging women around the world to have a voice, to speak out for what they want, and stand up for what they want, which takes tremendous courage. No one has any idea of how much courage these things take.

You at Mission ONE are one of many ministries working to help bring women out of poverty and oppression—with your sewing projects for example.

Yes, that’s right. Mission ONE has various projects with our ministry partners in Africa and Asia of this nature.

The biggest thing is awareness. You can spread awareness through the Internet. I believe we can inspire one another and we do that through things like films and books. We want to inspire other young women to say their truth. And when we can each be who God made us to be our highest expression of ourselves, we will have more of the Kingdom. And I think that’s such a great slogan—“more like the Kingdom.”

Your video on YouTube—“New Stories of Honor”—hasn’t been seen by a lot of people yet. But we hope that it will be, and we’re going to do our part at Mission ONE to promote it. Could you share what is the main idea of this short film, and what are your hopes for this video?

One of the messages in the video that I like the best is this: we can learn from our old stories and new stories are meant for us to grow into. And each of us can write a new story. I think it is lovely and inspiring how that comes through in the film.

But the overall message is that women in many parts of the world including here in the United States, have been shamed. It has been used to control them. And it’s time to let that go. I believe that shame is the lowest of our emotions. To shame, another person is the lowest thing someone can do to them. That’s why in the stoning story, Jesus transforms the woman from shame to honor. He did it in such an unexpected, beautiful way. His words were amazing. You couldn’t have come up with anything better as a scriptwriter. Jesus transformed her by honoring her. Honor, I believe, is connected with love, which is the highest emotion we can feel. And that’s what Christ portrayed when he came here. And now, through people, when you’re inspired by something, that’s love.

Yes, I’ve heard it said that honor is what love looks like. That comes from a book by Fawn Parrish. I think we often underestimate, on the one hand, the negative power of shame, and on the other hand, the transformative power of honor expressed by love for one another. You have brought this out in your video, Terri, and we’re so thankful for that. 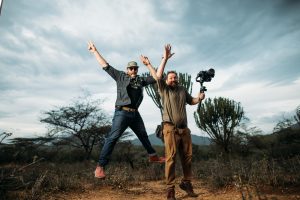 There is power in sharing someone’s story. There is power in being seen and heard. There is power in connecting with a person you’ll likely never have a chance to meet. Mission ONE is working to transform Pokot, Kenya through a local Indigenous partner living and working in the community. In 2021, the All-Girls School…